I’m sure most of us can remember where we were when we saw the planes hit the World Trade Centre’s towers, and watched in horror as the events of that fateful day unfolded. We all sat shocked as our TVs revealed a much-sanitised view of what took place on Sept 11 2001, the reality was much worse than anyone could have imagined.

A couple years later, I, took a tour of Ground Zero and of the small church that survived the terrible destruction. I walked around the beds, uniforms and equipment left behind by the firefighters. No one reading the eyewitness accounts or viewing the video footage could fail to leave New York without a mixture of emotions; mostly wonder and disbelief at what happened in the downtown area.

I never forgot what I experienced in New York. The more I read, the more I began to have a small insight into what the brave firefighters had to endure on that day.

A turning point came after I watched a video of a woman called Pearl Maynard. She recalled that day, of how she watched her son, Keithroy, preparing for his shift in Ladder 33 of the FDNY. It would be the last time she saw her son as he headed out the door on a beautiful autumn morning.

I painted two original oils. The first was a tribute to Keithroy. He held the Stars and Stripes and had his name ‘Maynard’ printed on the tail of his uniform – a customary practice for all firefighters. In the painting I included his helmet with the number of his firehouse.

The second showed the close relationship a young boy has with his father, but I replaced the usual old suit and flat cap with a New York firefighter’s uniform. I made the scene entirely American by draping the little boy, in his tartan shirt and dungarees, with the Stars and Stripes. Since then I have produced this painting as a limited edition print that can be personalised to include any firefighter’s name on the jacket and his or her favourite sports team on the kid's baseball cap.

Little did I know how much these two paintings would impact on my life a year later, when I exhibited my work at the New York City Fire Dept. Museum in the Soho district of Manhattan. There I was able to meet the firefighters who told me first-hand of the many acts of bravery that they completed during that time.

At the exhibition Regina Wilson, the first woman President of the Vulcan Society (a fraternal organisation for black firefighters in the FDNY) introduced me to an older lady - Pearl Maynard. I immediately recognised her from the video I had watched all those years ago as the mother of Keithroy. As we hugged each other, we both wept and it was an honour to show her the painting I had done of her son.

That honour remains with me to this day, and I’m proud to have had a very small part in promoting the bravery and self-sacrifice of everyday heroes - the unique band of firefighters around the globe - young, old, black, white; all races and genders.

The deep emotional connection I have developed with these unbelievably brave men and women encouraged me to produce a portfolio of work, exhibited in the New York City Fire Museum and at my own gallery in New York. The paintings include a moving tribute at Ground Zero, a scene highlighting dedication and teamwork displayed by the Fire House crews, and portraits recognising the contribution of men and women of colour to the Fire Dept.

New York’s firefighters (FDNY) are renowned across the world for their valour, dedication and sacrifice. They have inspired me to create a body of work that honours the city’s ‘Bravest’ and celebrates the qualities that make them some of the most extraordinary working people on the planet.

I am also delighted that this portfolio of my work resonates with men and women in the emergency services around the world, with limited edition prints of these paintings being ordered in the UK, Europe, USA and Canada. 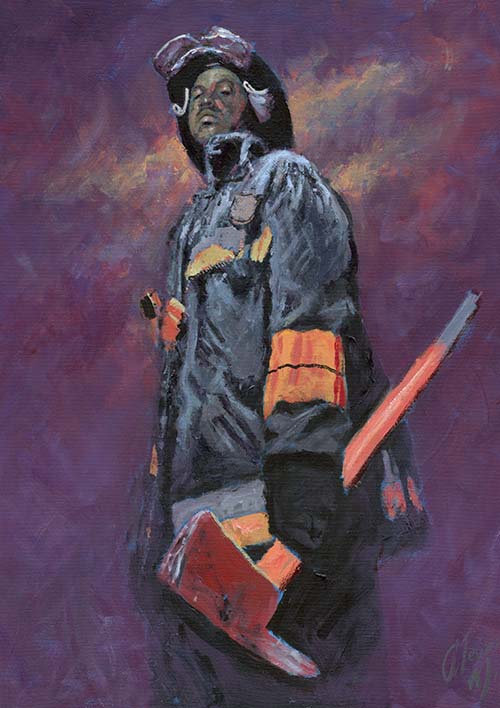